More Of The Same

Started my fourth week out of work quite miserably as my back seized up again. Over the past year, I have had days where my back just feels sore or sometimes tight with minor pain, but it hasn’t been this severe since the forest fire last year. But maybe I should back up here a bit...

…on my last blog, we were waiting for Spirit’s cytology results that day (Monday) regarding the growth that she has. Those results came back as benign! Whew! So now I will just continue to monitor it.

On Friday that week, we were able to do this!: 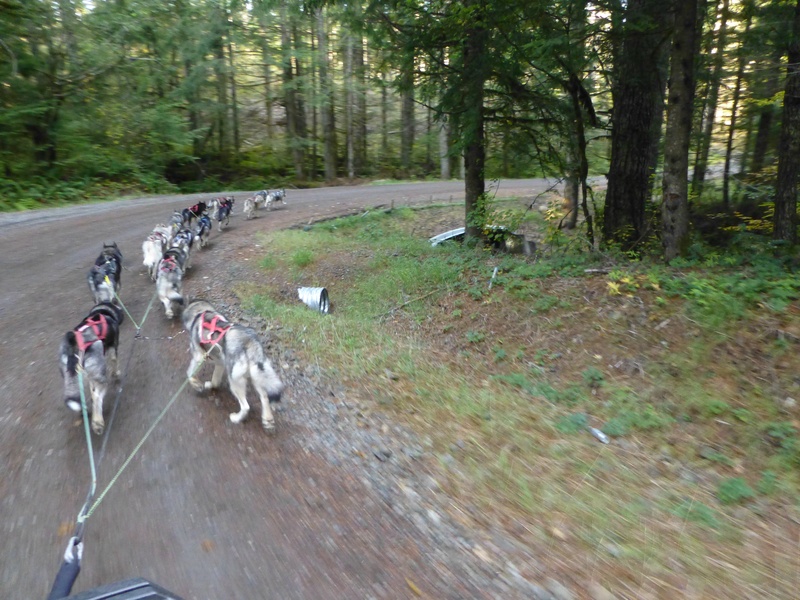 Yes, we got our first run in! The difficult part was not taking my main leader Kwyta as she was still battling pneumonia. Normally she gets the first lead (or more) of the season. Although Spirit and Rosie were both cleared to run, I decided to leave them home as well mainly to keep Kwyta company as she would have been left alone on her side of the kennel and taking her with us without running her would have been torture for her. This plan also made our first outing a little easier, with less to deal with. Hook-up was as crazy as ever though, with dogs screaming their heads off, chewing on tug and neck lines, and tangling themselves in their harness out of excitement to go; but once we were moving it was smooth sailing. 14 dogs ages 4-10 and not one issue. Fun!! What was cool about this run was I put Joy in lead. She is such a wonderful leader and it was great seeing her lead the big team again. I partnered Kwyta’s daughter Ana with her. The look in Ana’s eye the few weeks prior as well as her behavior was telling me she desperately wanted to go running again. She was a great choice and her and Joy did well together.

CLICK HERE TO SEE THE TRAINING RUN VIDEO . This video can also be found on the video page.

The next morning, unfortunately, Spirit had a moderately sized seizure about 20 minutes after she had received her meds. This was a bit devastating to me as she hadn’t had a seizure since she first started 3 years ago and I couldn’t help but think it was the stress from not taking her running that caused it. It also put a damper on a great day of running. It seems we can’t have a good day around here without a bad day cancelling it out. Spirit recovered well, I reported it to our vet, and have kept an eye on her.

However, I think the stress of yet another health issue went straight to my back causing pain and tightness. I felt it as soon as I came in, quite chilled, after sitting outside in the wrong clothes for far too long with Spirit. The next 10 days were bad with a couple days in there that were a little better. Better enough to allow me to take Kwyta to the vet for her follow up x-ray except the day I took her in for her scheduled appointment they were having an emergency situation and rescheduled us for the next day. Of course, right?! The next day I was able to take her back and her x-ray showed that her lungs were clear and she was cleared for running except we haven’t been able to do that because of my back! It’s always something. Oh wait, maybe I shouldn’t even say that. Too late…

…as Joy had a seizure one week after Spirit did and one month after she had the two in a row. This is such a time consuming ordeal as Alan and I were up all night with her until she felt comfortable enough to be left alone, which takes hours. The vet and I decided to increase her dose of medication. She hadn’t had an increase in 3 years. Not only do I not want her having seizures every month but we can’t go through that process every month either. So far she is doing well on it and I hope it stays that way for several more years. Meanwhile it makes me concerned that Spirit might have another one now. If she does we will have to increase her medications as well but that would be her first increase.

I have been wanting to post this update for a while but it was just too difficult to stay that focused with back pain, and what a waste these last couple of weeks have been. All my plans for work in the kennel as well as around the house have been on hold as I just mostly sat. The last couple of days have been much better however as I am able to do more out in the kennel and I can tie my shoes a lot easier! We have also missed out on a number of great running days as the temperatures have been low with plenty of rain to keep the dust down. I hope we can get back into training next week, this time with all the dogs, as I continue on with my little employment break.

Oops, you forgot something.

The words you entered did not match the given text. Please try again.