Well our fall training is not off to a very good start, in fact we haven’t started at all. On my last blog I posted that I had given my notice at my job. I was really looking forward to a little bit of peace and relaxation for the first week or two with the absence of so much stress, and to also kick off our fall raining, but it seems that wasn’t meant to be. I am just glad I wasn’t trying to perform my job as well during these last couple of weeks.

The first weekend after my last day, I could tell Spirit wasn’t acting well so I checked her temperature and found she had a low grade fever. Of course it was on Sunday so our vet was closed. I decided to closely monitor her temp and if it got to 103, which is high for her, I would take her to the hospital. Luckily it started to go down instead and she started acting normal again. Unfortunately while taking one of her temps I discovered a good sized growth on her underside so I took her to the vet the next day. We decided to get a cytology on it as we did with her sister Rosie in the summer. When the vet brought her back into the room she stated the fluid she removed was infected and that would need to be cleared first. So I took home a bottle of antibiotics for her to take twice a day, along with her seizure meds, and I also had to heat pack the site twice a day. Follow up at the end of the antibiotics.

Because of Spirit’s lump I decided it would probably be good to check Rosie again and found she had grown another, but small, growth. Well Rosie needed a vet visit that week anyhow to follow up on her liver values as reported in my last blog. So later that week I had to put Rose on a 12 hour fast, which meant the whole kennel got to fast, it is just easier. I took her in for blood work and brought her home. She ate a small (fatty) meal and returned to the vet 2 hours later for another blood draw. This takes some planning and uses up an entire morning. Results would follow around the end of the week. The vet also checked her new lump and felt it was more superficial so we decided to keep a watch on it.

When we got to the end of that week, Saturday morning, I saw that Kwyta, my main leader, had vomited up her meal from the night before and she was acting like she did not feel well. I took her temperature and it was 104.3! Luckily our vet is open on Saturday and I was able to get her in that day. Chest x-ray showed that she had pneumonia! So I came home with 2 different antibiotics for her for an extended amount of time. It was also suggested that I try a technique of moderately patting with a cupped hand on her rib cage to help loosen up the fluid in her lungs. I do this once or twice a day and have no idea if it is helping but I do get a funny look from her afterwards. She will need a repeat x-ray at the end of her course of antibiotics and this takes her out of training at least until then. 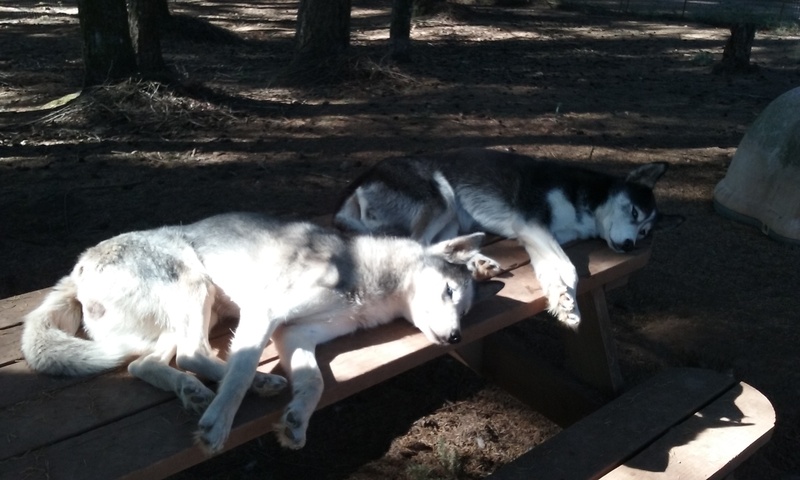 Ah, this is what leaders do. Taken a few weeks ago, sisters Looker (L) and Kwyta (R) holding down the picnic table.

While at the vet with Kwyta I received Rosie’s bloodwork results. It does indeed show that she has a problem with her liver. This puts us in a tough spot for her as the next course of action is more extensive, and expensive, testing. If those results show that she has a liver tumor, treatment is surgery followed by chemotherapy. Rosie is a 10.5 year old dog but with no outward symptoms of having a problem. You would never know there was something going on with her. The vet said it is hard to predict but she could do well for a year or longer before showing any symptoms of a problem. We will put this on hold just for now. We need a little time to make a decision. I did get her cleared to do light training however.

Spirit returned to the vet this past Saturday for her follow up. The vet was very glad to see that her growth was down to about half of its original size and she was able to get a good sample for cytology this time. We should receive results today to see what the next recommended step is for her. A benign result would be wonderful and make the next decision so much easier. Spirit was also cleared for light training and the vet felt her condition was the better of the three girls.

During this time, Alan and I were able to get the quad and trailer checked and prepared for fall work. We also were able to get up to the trails to do some clearing and maintenance as needed. Hopefully we will be able to get our first run in this week, although it will not be easy leaving Kwyta behind. I wouldn’t mind waiting for her except everyone else is a bit antsy, especially the boys who are out of their minds with so many girls in season and I think a run will do them some good. 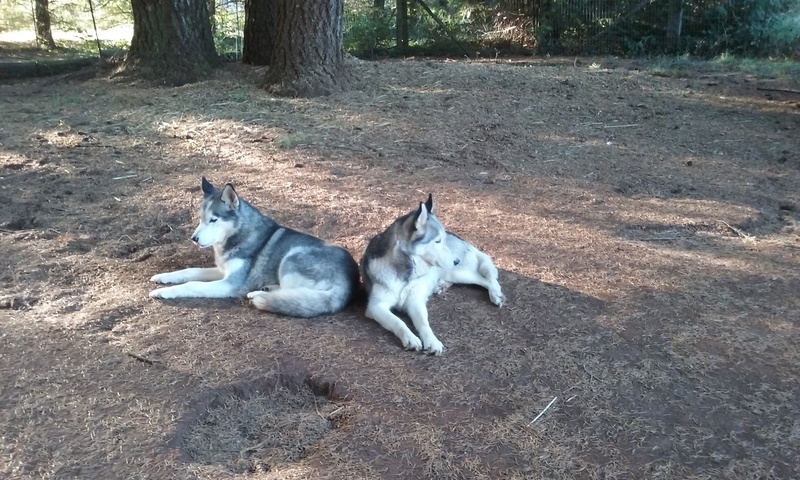 Taken a few days ago, best friends and sisters, Rosie and Spirit.

Oops, you forgot something.

The words you entered did not match the given text. Please try again.