Northern Blast Sled Dogs is a small kennel of Siberian Huskies located in Estacada, Oregon. Most of our dogs are training for mid distance races, while the rest run recreationally or are retired.

Our kennel is not a business. This is only a fun hobby for us as well as this website. We will post updates, events, pictures and stories of our times on the trail. Start by checking the blog below. You can add comments to my Blog entries, Photo Gallery, Video's, Calender, and Guest Book. Updates will be listed here. Sign up as a member (located on the sidebar) and receive automatic e-mails whenever the site is updated.

CLICK HERE TO MEET THE DOGS PART 1: THE GIRLS

CLICK HERE TO MEET THE DOGS PART 2: THE BOYS 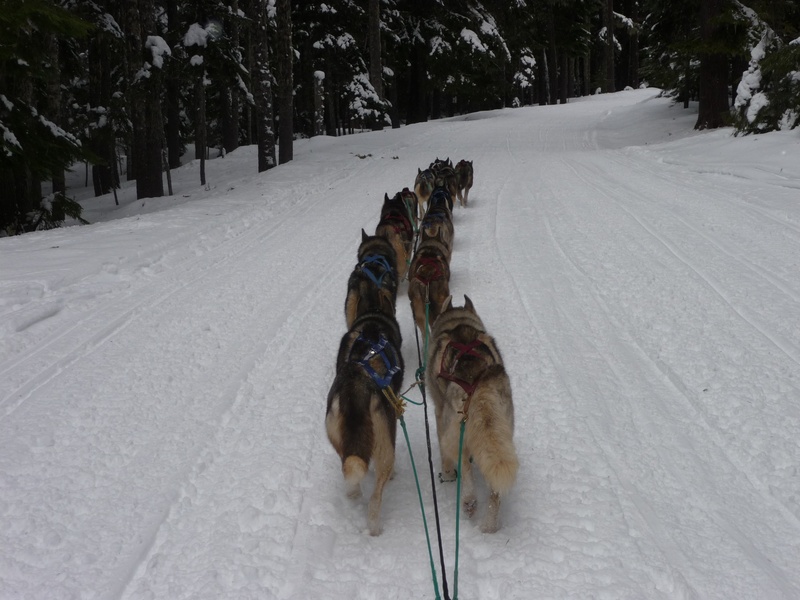 More Of The Same

Started my fourth week out of work quite miserably as my back seized up again. Over the past year, I have had days where my back just feels sore or sometimes tight with minor pain, but it hasn’t been this severe since the forest fire last year. But maybe I should back up here a bit...

…on my last blog, we were waiting for Spirit’s cytology results that day (Monday) regarding the growth that she has. Those results came back as benign!...

Well our fall training is not off to a very good start, in fact we haven’t started at all. On my last blog I posted that I had given my notice at my job. I was really looking forward to a little bit of peace and relaxation for the first week or two with the absence of so much stress, and to also kick off our fall raining, but it seems that wasn’t meant to be. I am just glad I wasn’t trying to perform my job as well during these last couple of weeks.

It's well past due for an update. Life has been busy and a bit stressful so it was easier to put this update on hold. But with summer gone and fall finally here, it is time for some catch up.


Several events occurred in May:

First was the sad news of the passing of Terry Hinesly. We (finally) met Terry in 2010 at my first Eagle Cap race where he was the race marshal. Not only was he a fantastic race marshal but Terry had a way about him that made you fe...
Read Full Post »

Updates From The House

Here's an Alan update: After a couple of reschedules, for one reason or another, Alan finally had his (4th) surgery 4 weeks ago. The surgery went well and he now has 2 pins and 2 staples holding 2 bones together allowing them to fuse. He has to be completely off that foot for the first 6 weeks of recovery so he has been getting around minimally on crutches, and apparently they don't make crutches out of wood any more.

Anyhow, it is all a wait and see now. The doctor doesn...

Unbelievably warm temps this weekend. It was in the 60's by 9:00am this morning but the dogs seemed to be enjoying themselves anyhow.

I will start with the 2 ends of Ana:

After my last posting, I received several requests to keep our blog going. So for now I will keep the website up and running.

Also as requested here is the first update regarding Alan's status. He was scheduled for surgery last Thursday but due to some insurance issues, it has been postponed and a new date has not been set yet. Not a great start! Unfortunately this glitch pushes everything back.

So, as mentioned in my last posting I will try ...

I haven’t been blogging because we haven’t been training, so I thought I would share our current situation. Once again this season has not gone as planned (or hoped for), turning out the same as the last couple of seasons with a few more emotions mixed in.

Alan is still out of work from his last (third) toe surgery in the spring. We were able to get some training in mid fall, but his toe pain has continued. When more pain showed up in his leg a...

Had a wonderful Halloween weekend at the home of Henning Bartel and Marguerite Warren in LaPine Oregon, as they, once again, hosted an unforgetable mushing weekend. If you follow this blog you may recall that last year Alan and I also attended the first running of this event when Henning brought out Alaskan long distance musher Brent Sass as the guest of honor. So how could Henning top that?

This year Brent returned along with Mike Ellis who we met last year at a...

Past, Present, and Future

Another 6 months has gone by and this blog has been very quiet. It does not mean the past 6 months have been quiet however. So, in trying to catch up, I will just stick to the highlights.

First a quick recap: Last season proved to be another poor training season with many interruptions. My last posting showed our last training run of the season, in February, after a short lay-off. I never got my sled out for a single sled run and we had no training in the spring ...

Ahh, finally back to the blog. First we had a technical glitch that kept me from accessing the website for a while and I planned on doing an update in February. When I finally did start this the Iditarod began and I was completely sucked into it so this has been on hold for a while. Now that the Iditarod is over and the dust is starting to settle I can get back to it.

In the month of February we had too warm of weather to train followed by an extreme downpo...